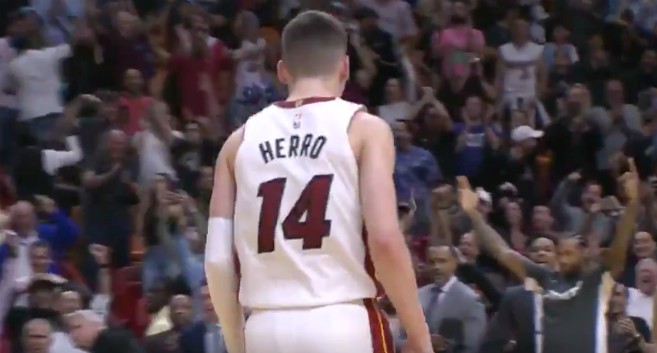 Former Kentucky Wildcat Tyler Herro turned in an incredible performance to lead the Miami Heat to a win Sunday night vs. the Chicago Bulls.

Herro finished the game with 27 points on 10-of-22 made field goals, including 5-of-11 from three-point range.

The 2019 lottery pick proved that he is indeed a bucket by hitting clutch shots when the Heat needed them. He drained a three with 7.1 seconds remaining in regulation to give the Heat a two point lead. The game eventually went to overtime but Herro was just getting started.

Herro’s biggest shot of the night came with 38.2 seconds remaining in overtime. With the score tied 105-105, Herro delivered the dagger to give the Heat the lead for good. Additionally, he hit two late free throws to ice the game.

In all, Herro scored 16 of Miami’s final 18 points to pull out the win.

John Robic’s daugher, Hayley, Passes Away after Battle with Cancer

Keion Brooks’ Message for BBN on Returning for Sophomore Season