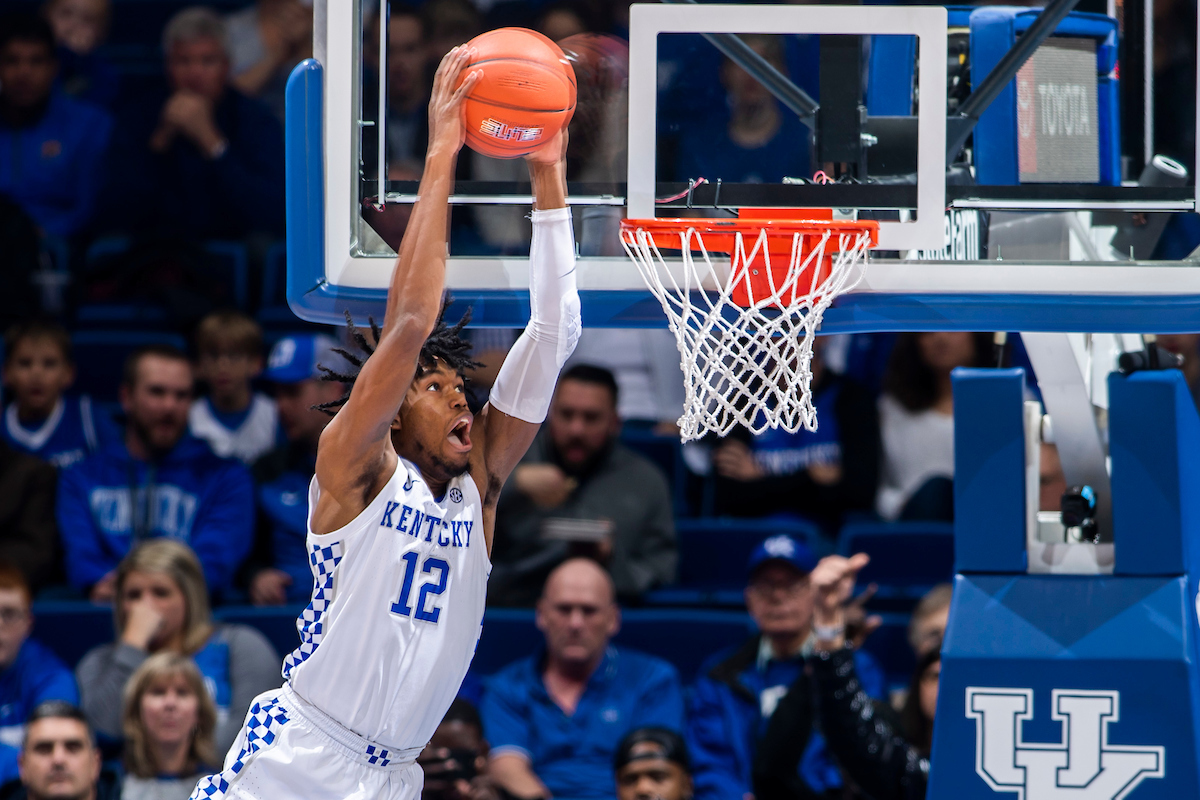 Kentucky could’ve been playing in the Final Four this weekend and taking aim at a ninth NCAA title. However, COVID-19 had other plans and the global pandemic forced the cancelation of the NCAA Tournament.

Four weeks ago, John Calipari’s team provided hope for Big Blue Nation that the 2019-20 Wildcats could be the team to return to the Final Four and bring home another title. Kentucky had just completed an 18-point second half comeback to defeat Florida in Gainesville, fueled by a total team effort. Five days later, with everything they had worked so hard for right in front of them, it was over before it even started.

“My first thoughts was of disappointment because I knew how hard the team had worked all year,” said Keion Brooks Sr. “Then you think about the lives and you understand why it had to happen. The team was headed in the right direction with a great deal of steam building. I thought we had everything we needed to bring back number nine to Big Blue Nation.”

Brooks Sr. isn’t the only member of Big Blue Nation to feel that way. In fact, Calipari said the same just hours after breaking the news to his team that the tournament had been canceled.

Calipari had plenty of reasons to feel that way. If the final 20 minutes of the regular season were any indication of what was waiting in March, the Final Four in Atlanta and a national championship game tomorrow night could’ve been the ending.

Keion Brooks Jr. was a big reason why Big Blue Nation felt optimistic for an annual March run. Against Florida, the No. 24 player in the 2019 247 Sports Composite Rankings looked to be that and more.

Brooks played a season high 27 minutes and scored 10 points in the win, his highest point total since scoring 10 at Arkansas on January 18. But what was it that changed for Brooks and finally helped him flip the switch?

“Keion’s strength was the biggest improvement that I seen,” Brooks Sr. said. “He was able to get to his spots on the floor and make plays to help his team win.”

While Brooks’ strength did improve over the course of the season, the switch was flipped on a Wednesday morning three days before his breakthrough at Florida. Just hours after a disappointing loss to Tennessee at Rupp Arena, the 6-foot-7 forward was in the Joe Craft Center putting in extra work.

“The great thing about the next morning was it showed that Keion was really bothered by that loss. To get up that early after that type of loss and just put in more work shows me he is growing up. He shot over 1,000 shots that morning before class, that’s what Kentucky is about.”

Three days later, Brooks Jr. hit 4-of-5 shots, including both three-point attempts. Calipari even called his number with the game on the line.

“Cal calling his number down the stretch showed how much he believes in Keion. That was great to see.”

Brooks Sr. has been a big supporter of Calipari, even when his son would play limited minutes. Following Calipari’s second half ejection at Arkansas, he loved seeing Calipari fight for his players and the love they showed in return.

“Cal is always pushing for more out of his guys, never allowing them to settle. I believe kids these days need that push because they get patted on the back so much.”

“Loved seeing him show the world more than just the basketball and more of the person. His mom and I have been pushing him to show more of that side.”

So what comes next for Brooks now that the season is over and COVID-19 has forced the remainder of the semester and summer schedule online? The NBA Draft process is still uncertain but a change in the rule allows players to test the process and receive feedback as many times as they choose while still retaining their eligibility.

“I think that’s a great change in the rule and we are looking closely at that option. Feedback is always good for a player to have a better understanding of what teams are looking for.”

A sophomore season in Lexington could mean big things for Brooks and there are now successful stories to provide an example. In recent years, PJ Washington and Immanuel Quickley have put together two of the most successful sophomore campaigns under Calipari. Washington was a consensus Third Team All-American and No. 12 pick in the 2019 NBA draft while Quickley was the SEC Player of the Year by the league coaches this season.

“I think it’s great for the program so the pressure of being a one and done isn’t hanging over guys heads. Families can see how your son can develop and reach their goals. The second season things really slow down for you as a player. You know what the coaches expect and you have the experience to lean on.”

If he chooses to follow the same path, what would Keion Brooks Jr. be in a second season at Kentucky?